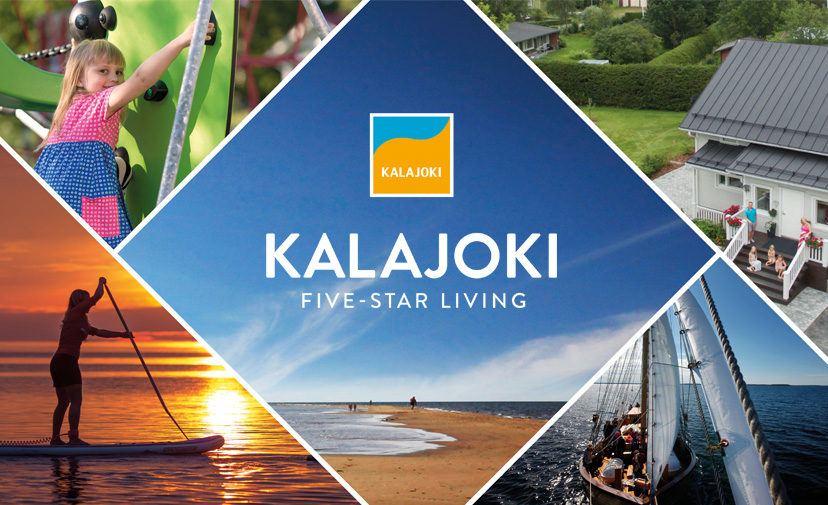 The purpose of the uniform graphic design is to represent the city’s characteristics, strengthen the city’s image and function as a tool in the consistent management of the visual look. In addition to other graphic elements, the guidelines also include detailed instructions on when and how the Kalajoki symbol, logo and coat of arms may be used.

The new slogan for Kalajoki is ”Five-star living”. It depicts the way Kalajoki makes it possible to experience a life-long five-star holiday right in your home town, for residents of all ages.

Low cost of living and the city’s active role in creating new services and residential areas makes living pleasant for everyone.

Kalajoki offers great opportunities for studying and working, as well as strong support for a vast group of entrepreneurs. After the working day, Kalajoki is a five-star setting for free time and vacation, with its comprehensive services and internationally acclaimed seaside nature. All of this makes everyday living at Kalajoki a five-star experience.

For marketing purposes, a combination of the name logo, slogan and the Kalajoki logo is used. The text is always white and used over a photo or coloured background.

The symbol should always be four colour. Colour variations may not be ordered or made.

The minimum width of the symbol is 35 mm. If used independently, the Kalajoki logo should be at least 15 mm in width. Adding something on top of the symbol or modifying it in any way is not allowed. The symbol should be used from the originals prepared for each media separately.

In official context, for example forms, and in situations where space is limited, the Kalajoki logo may be used independently. The logo can be used against a white or coloured background and on top of a photo. 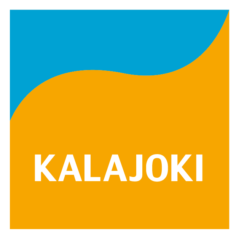 If you have any questions pertaining to the use of the symbols, please contact communications.

The Kalajoki coat of arms is reserved for official and ceremonial purposes of use, such as statements and verdicts. The coat of arms is used in forms and business gifts in an elegant manner. A colourless version can be laser etched onto metal, glass and other surfaces or embossed on paper. External actors require permission for using the coat of arms. The use of the coat of arms is decided by the Mayor.

The logo depicts the independent maritime transport operations pursued by residents of this seaside municipality as well as the Himanka port and anchorage that have been well-known since the old days.