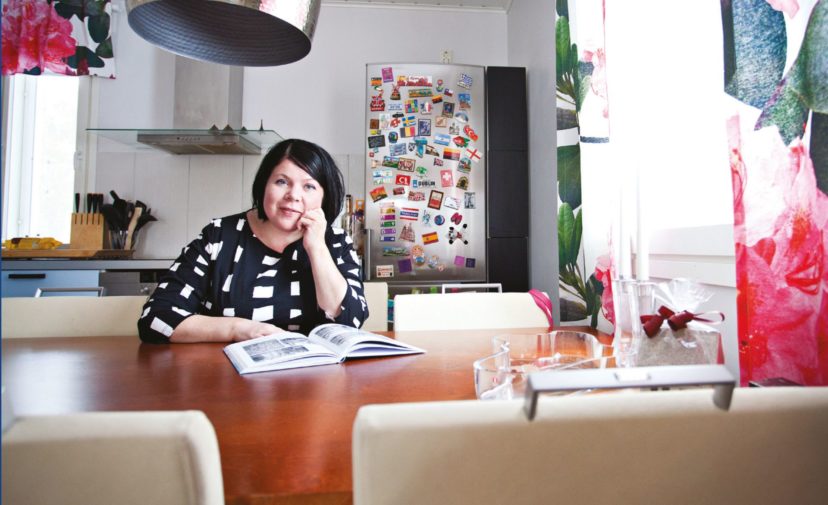 Roman Vozgrin considered moving to either Kalajoki or Raahe when he was assigned to the Hanhikivi 1 construction site in Pyhäjoki. Roman chose Kalajoki, as he and his family felt they were welcome here.

“She organised everything she could. My family was able to visit schools and day care centres and see available flats in advance.” At the moment, two of his children go to the Pohjankylä school and his youngest child goes to the Puolukka day care centre. He himself works in the main contractor company of the Hanhikivi 1 nuclear power plant.

Roman moved to Finland from Russia nearly two years ago. His wife, Natalia Vozgrina, and their three daughters Katya, Yulia and Liza moved to Finland last December. The children are now focusing on learning the new language.

“The school environment here is much more relaxed than in Russia – perhaps a bit too relaxed. But the children love it,” Roman says.

The family currently lives in a flat in a terraced house, but Roman quickly assures us that the current housing solution is temporary: they are planning to stay in Kalajoki for good.

“We intend to buy a house of our own.”

The dream of a house proves that the family likes their new hometown.

“At first, I was afraid I’d go crazy as it’s so quiet here, but I quickly got used to it. The town has everything we need, and if we are looking for something more, we can visit the bigger cities that are located nearby.”

The family might have chosen to move to Raahe if the City of Kalajoki had not assisted them significantly. Roman appreciates the welcome the family has received.
“Everyone is friendly to us and doing their best to make us feel welcome. Even the school principal, Juho Silvasti, often asks how we are doing. That feels nice.”

The aid offered by the City of Kalajoki also impressed Eva Pitkänen, who works as a project manager at Fennovoima and moved to Kalajoki last autumn. Eva had lived in Espoo for seven years, and, like Roman, she moved to Kalajoki due to a job assignment.

“I was considering both Kalajoki and Ylivieska. I ended up choosing Kalajoki since it’s closer to my workplace. I was also intrigued by the busy summers in Kalajoki. I was adamant about wanting to live at the Hiekkasärkät area,” says Eva, who commutes daily to Pyhäjoki.

When Eva expressed her interest towards living in Kalajoki, her colleagues told her she could contact Anne Tullila – and it was worth it.

“Anne and I went to see nine flats here. I wanted to see both rented and owner-occupied flats, and it saved me a lot of time to have someone organise everything.”

Eva was happy to be accompanied by a local who could tell her about the town and its areas in detail.

Eva ended up buying a flat because she knows the Hiekkasärkät flat will be easy to rent out, should the need arise.

“However, I’m not planning to move out anytime soon since I really like it here.”

She also considered the reactions of her family and friends when choosing a place to stay.

“Many of the people I know have told me they want to visit me here as soon as possible. My summers are fully booked since everyone wants to come to Kalajoki. My father and some of my friends have already visited me.”

Eva, who is originally from Salo, says that there is plenty to see and do in Kalajoki.

The town’s internationality is also an advantage.

“I have already encountered tourists in the winter. I’m looking forward to seeing what it’s like in the summer.”